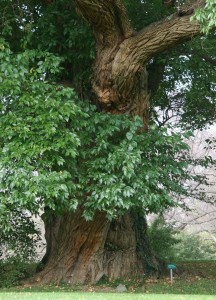 Osage-orange is native to the areas of the Great Plains historically inhabited by the Osage Indians. It was often planted in hedgerows to establish natural fences due to its stout branches and thorns. With a distinctive orange-brown bark, its large fruit resembles an orange and contains several nut-like seeds. Its very heavy, hard wood was once used for fence posts, wheels, and bows, hence its nickname “bow-wood.”

Osage-orange leaves are 3 to 5 inches long and borne on thorny twigs, and have pointed-oval shapes and smooth margins. Its large green-yellow fruit ripens in fall and exudes a thick, milky juice.