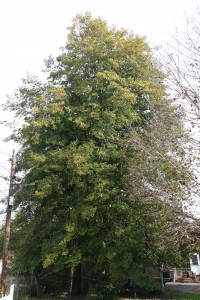 The native American holly is easily identified by its dark green, thorny leaves and smooth bark. Holly has both male and female trees, with females producing ornamental red berries that are a favorite food for birds. The American holly was named Delaware’s official tree in 1939 when the state was the leading exporter of holly Christmas wreaths. The wood is cream-colored and can be used as decorative inlay on furniture.

Holly was big business in Delaware in the 1920s and 1930s. As the year’s last cash crop, holly wreath production boosted farm income until imported plastic wreaths put an end to the boom by the 1950s.