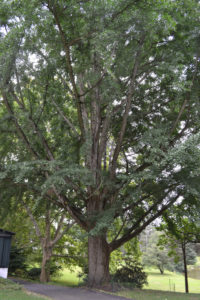 Considered a “living fossil,” ginkgo is the oldest tree species in the world and a link between conifers and prehistoric plants. It is often planted in parks, gardens, along streets, and in urban areas because it is very hardy and resistant to disease. Male ginkgos are preferable because the fruit of female trees is messy and emits an offensive odor. Ginkgo is easily identified by its fan-shaped leaves that turn a brilliant yellow in the fall.

Ginkgo leaves have a unique fan shape. Extracts from ginkgo trees are sold as herbal supplements claiming to improve mental function and memory.